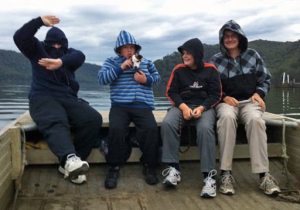 On 4th June, a small group of 3 Scouts, 1 Venturer, 2 Leaders and a dog meet at the new hall and drove to the oyster depot in Brooklyn. Gary Binskin’s brother picked us up in a punt and took us to his shack on the side of the Hawkesbury River which features in the movie the Oyster Farmer. It was a small shack with a generator and a room for sleeping in. Once all the supplies had been offloaded the Scouts and Venture went hunting for crabs to use as bait for fishing. After collecting about 20 crabs we sat down for some fishing, unfortunately the 4 of us were unsuccessful in catching anything, thankfully we had brought food for dinner. We sat around the growing fire and played cards for a bit. 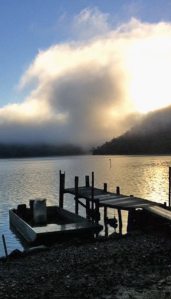 It was getting dark by now and soon we started making our dinner. After our big camp roast we roasted some marshmallows and then it started to rain, so we abandoned the fire and went inside to watch a film, Star ship Troopers. As we were watching the tide came in and the water rose up to the bottom of the shack. After the movie we turned in.

The next morning the 4 of us went for a walk while breakfast was cooked. We walked along the shoreline for about 20 mins before turning round. After a hearty breakfast we packed up and boarded the punt back to the oyster depot where we thanked Gary’s brother and returned home. It was a great relaxing sleepover in a beautiful location.

This entry was posted in Venturer News and tagged MCMK, Scouts, Venturer. Bookmark the permalink.