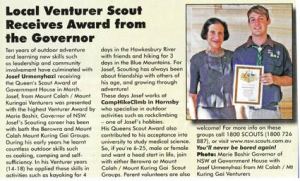 Extract above from the Bush Telegraph

Mount Colah Mount Kuring Gai Scout Group have  had a great year in terms of the quantity and quality of awards that we have seen presented to our youth members across all sections. This, of course, has been capped off so well by one of our Venturers, Josef Urmenyhazi, who became a Queens Scout in February. Josef is the first Queens Scout for our Group for about 10 years. This has been a huge achievement for Josef, and it is one that he will carry forward on his sleeve, on his CV, and in his confidence for the rest of his life.

He became the first Scout in the Mt Colah/Mt Ku-ring-ai group to earn the top honour in 10 years.

“Some people think being a Scout is all about tying knots or helping old ladies cross the road,” Josef said.

To earn the award he had to undergo various activities with Venturers (a group for those aged 14-18 years).

These ranged from group expeditions in the bush, kayaking on Hawkesbury River, undertaking leadership roles, and completing a first aid course. And he had to do it by his 18th birthday – which proved somewhat problematic.

“It was a bit tricky, especially since my 18th birthday was the day before the HSC started,” he said.

“In the end it was a relief because there was a lot of work involved.”

The first year medical science student said he would not be the confident person he was if not for his Scouting experiences.

“I pushed myself to the limits at times. It makes you do things you wouldn’t do normally,” he said.

His Scouting career also gave him opportunities to travel and introduced him to outdoor rockclimbing.